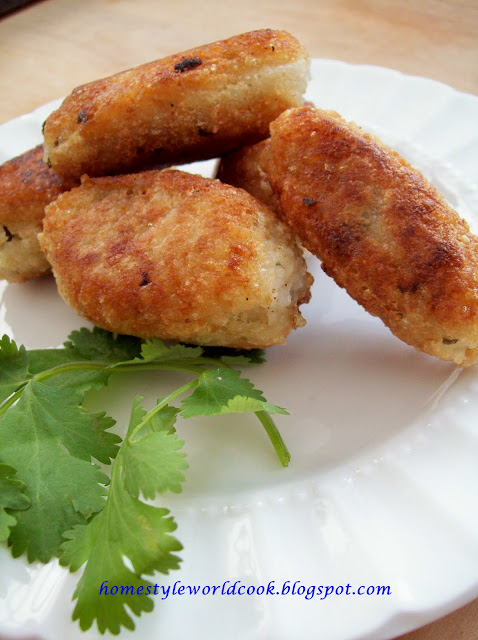 These were originally introduced to our family by an Iraqi friend, who recently immigrated here with her family. She explained to me how she made them, and then I worked up a recipe through trial and error. I am not sure how to write the name in Arabic- she called them something like (spelled phonetically) "Kooba Tih-mon". However, I was only able to find similar foods called Potato (Batata) Kibbi or Chap. So I just call them Meat-Filled Rice Fritters.

This is not the easiest recipe to try initially, but certainly worth the effort. Once you make it once, you learn the technique and can make them quicker. These are very nice to have on a picnic, or as an appetizer or part of a meal. These can be made with rice, other grains like bulgur wheat or couscous or potatoes and can be filled with meat or I have seen it filled with eggplant, as well. This recipe, however, is only with ground meat stuffed in rice. My friend believes that curry is necessary to use with ground beef since it helps take away some type of bad flavor. I am not sure if this is more because they were used to eating lamb, previously. The curry used is not a hot type. Also, she does not use too many other seasoning. I have taken a little liberty and added garlic- a must for me in any meat dish. I also added more parsley than she uses, as well as added some cilantro/coriander leaves. One might also try some ground red pepper, if desired. Many people in the Middle East have a spice blend that they use with meats. You might try some of the Arabic Seven Spice blend that goes by various names but includes spices like black pepper, cinnamon and allspice, nutmeg, sometimes ginger and paprika, as well as other combinations of spices.

This recipe is very approximate- I started with about 1/2 pound of ground beef and about 2 1/2 cups cooked medium grain rice. After I finished making the fritter- the rice mixture was gone and I still had a lot of meat left. I have tried to compensate for this in writing the recipe.

A note about the meat mixture- it needs to be smooth and like a paste. I added the parsley and cilantro before browning the meat. However, it lost some of its flavor- it would be better to add it to the meat after sauteing the meat.

Makes approximately 24.
Ingredients:
Directions:
*Note: if using potato instead of rice, you would first boil some potatoes/drain them, mash them and season them as desired with salt and a little pepper, mix with some wet torn bread or bread crumbs or beaten egg. If necessary to make the potato more firm in order to form it around the meat, you may need to add a little cornstarch.

Recipe variation: The Iraqi family we know also frequently eats these served as part of a soup- the fritters are boiled in a tomato based broth with a meat bone- lamb or chicken or beef- and some small pieces of meat, chopped potatoes and other vegetables, as well as chickpeas, which are common in many different Iraqi dishes. This is served with some rice or flat bread as part of a meal.

In addition, the fritters can be baked instead of fried, although they should be sprayed with a little oil before baking and be turned part way through the baking (or put on a wire rack on the baking sheet and then the air can circulate for all-around crispiness and you won't need to turn them- just bake until golden brown!).
Posted by Sarah/Homestyle Cooking Around The World at Saturday, February 05, 2011