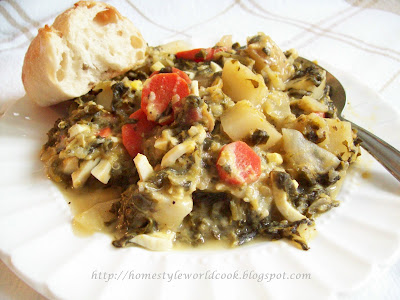 Well, I could not pass up a great deal on frozen turnip greens at my local discount grocery while ago- a HUGE  3 pound box for only $1.79! Normally I might have to pay almost that much for a 1 pound package of some frozen greens. So I bought 3 boxes-- later wondering for a minute how I was going to use 3 pounds at a time. However, since it was such a good deal, I did not spend much time on the small details.  ;)  When I started thinking about what I could use them to make, I remembered that turnip greens have a slightly bitter flavor as compared to spinach or kale. So I began to think more about how I could incorporate them into things that my children might eat and not complain too much! While I had previously used these greens in soups and eaten them sautéed with bacon, I was looking for something a little different and some way that I could use up a lot of them without eating a huge pile of them by themselves. 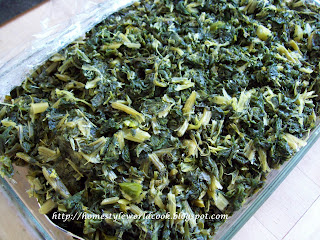 So this is the huge block of turnip greens, partially thawed.

After perusing the internet for ideas, I decided it would be good to mix the greens with some other vegetables (including some that have a little natural sweetness to help offset the bitterness of the greens) and a little ham for extra flavor. Then I thought it might also be nice to have a little milk or cream sauce- I ended up making a white (béchemel sauce) to mix in at the end. In the process of adding this and that, I got the idea to throw in some quinoa, which I have on hand but do not use as much as I would like to. This ended up being a perfect addition- not really enough to stand out but still there adding some great nutrition.

As is often the case, my dish ended up to be a HUGE pot that we will be eating on for a little while. I used probably about 1 1/2 pounds of the greens. If you have a "normal" amount of fresh greens or frozen- like 1 pound or less, than you will have a more reasonably sized dish. I have attempted to cut my amounts in half, which may still make a normal "family-sized" amount. This dish can be a main dish or used as a side to other foods. I was pleasantly surprised to find out that both of my children, although initially were a little hesitant to try it, ended up eating it very well and commented on how good it was. Feel free to leave out items or add in other foods, as desired. 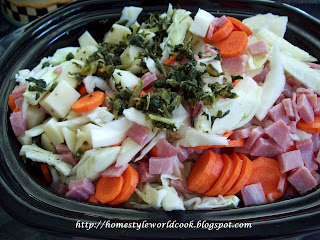 The large crockpot it started in- had to be moved into another pot to finish on the stove.

This is something that can be started in the morning in a crockpot and be ready in 4-6 hours on high or 8 hours on low. However, I had to switch over to a pot on the stove since I did not get it started early enough and needed to speed up the cooking process. I am notorious in my family for my soups/dishes that start in one pot, then have to be moved into a bigger pot- sometimes multiple times.
Serves 4-6
Ingredients:

* Turnip greens are an amazing food- so full of nutrients that they really are another one of the "superfoods". Feel free to check out the site I found that does a wonderful job at detailing just how good this food is- http://www.whfoods.com/genpage.php?tname=foodspice&dbid=144  I did not realized that it is the turnip green's high calcium content that contributes to its bitterness. It is also very rich in cancer-fighting nutrients. So cheers to the humble turnip greens!

Posted by Sarah/Homestyle Cooking Around The World at Thursday, June 16, 2011 2 comments: