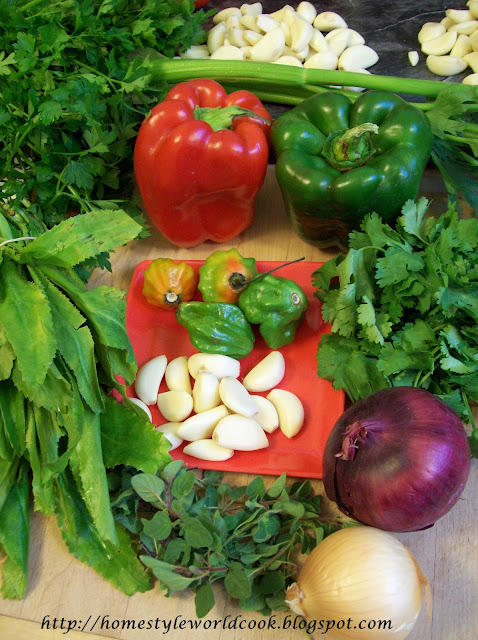 I finally was able to collect the ingredients and make this recipe. This is the "liquid gold" that I often cook with and recommend using in so many dishes to add exceptional flavor. I was introduced to it when my Puerto Rican friend taught me how to make Puerto Rican Rice and Beans (Arroz con Gandules). This mixture is really what provides so much flavor to many of the Puerto Rican and Dominican meals. While you might find it in jars on some of the grocery shelves, it has very little flavor and is a world of difference from the freshly made sofrito. Since it is much easier (and cheaper) to buy these items during the summer, it makes sense to make a big batch so you have enough to last through the winter. It keeps in the refrigerator for a long time and extra containers can be kept in the freezer for months (I had some that after a year was still good, but maybe not as strong). 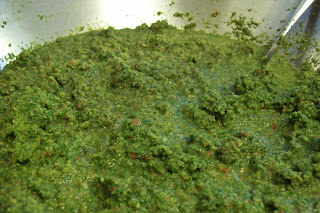 This was a BIG batch!!
There are so many variations of this mixture but the commonality is the combination of green peppers, onions, garlic, cilantro and culantro (also known as recao, mexican coriander, long coriander, and the list of alternative names goes on). Many people also add a small pepper called aji dulce, which is usually found in hispanic markets. From here the variations continue with various herbs and seasonings. I have taken some recipes from a couple hispanic friends and made up my own. To make this, you need a good, strong blender or food processor. It also helps to have a helper or two to make the work go faster and enjoy some conversation!
When I was making this batch, I experienced a funny thing-- this huge batch of sofrito took most of the day for me to prepare all the ingredients and then blend them together. By the time I was part way through the blending process, I felt that the culantro (which has normally quite a strong smell) did not have much of any smell. Feeling frustrated with the fact that I was putting all this work into something that might not turn out very potent and we had bought PILES of this herb, I called my husband at work and told him to pickup some cilantro at the store on his way home. When he walked in the door and started helping me finish it up, he commented that it had a LOT of smell! So I ended up using all the culantro as well as the cilantro- just to be sure! Maybe my sense of smell was becoming immune to it after breathing it all for so long.
Suffice it to say, the amounts in this recipe are not exact and everyone uses a little different amounts of the various items. I have made sofrito previously and ended up with a more watery/bland sofrito. I later found out I used too many onions. So the watery vegetables are best used in smaller amounts so it does not water down the flavor of the spices. When this is finished and used in cooking, usually 1-3 Tbsp is enough for flavoring an average size dish. (I often use the heavier amount since I feel it adds a lot of flavor, but you have to go according to your tastes and how strong the sofrito is.)  I actually tripled this recipe and ended up with probably about a couple gallons of sofrito.
Ingredients:
* 4 green peppers, or part sweet red peppers
* 5 aji dulces (a small sweet pepper)
*  5 heads of garlic, peeled
*  2-3 large yellow or red onion
*  3 bunches of culantro/recao
*  1-2 bunches of cilantro (some people use the reverse ratio- 1-2 culantro bunches/3 bunches of cilantro)
*  olive oil
* small amount (small blister pack) of fresh oregano, stems removed (may use dried if fresh is unavailable)
* 1 stalk of celery
*  1/2-1 bunch of flat leaf Italian parsley
*  optionally 1/2-3/4 tsp Italian Herb blend, 1/2 tsp cumin
Directions:
After all the ingredients have been cleaned/prepared and large items chopped into chunks, begin by putting some peppers, onion, garlic and herbs in a blender or processor and gradually add in some olive oil until it will blend enough to make some juices. As it gets more wet and liquified, then you can add the other things. However, you will need to work the mixture, moving it around some with a spatula and loosening any pieces that may have become lodged around the blades.
If the blender becomes too full, pour out about half and add in more chunks, you may need to put some of the liquid mixture back into the blender in order to get the new additions blending properly and not tax your blender too much. Usually, a good food processor will not have much problem with this, but blenders will burn out quickly if they are strained too much and may leave chunks of food at times.
When it is finished, divide into smaller lidded container that will keep in the freezer and reserve some to keep in the refrigerator for use immediately. So people keep old ice cube trays to freeze it in and then put the blocks into plastic bags. Once you use some plastic to store the sofrito, it will be difficult to remove that smell from it later. So I keep some containers just for use with sofrito.


**Some of the specific uses might be (of course) Puerto Rican and Dominican style Rice and Beans, just bout any dish that uses ground beef, put it under the skin of poultry before roasting, chicken soup/broth for a little different flavor, and the list goes on.
Have fun experimenting!
Pin It

Posted by Sarah/Homestyle Cooking Around The World at Friday, September 30, 2011