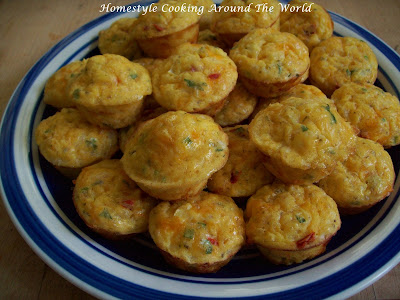 I made these mini-quiches recently for a garden party. These are really a quick version of quiches since they do not have a pastry crust. Instead they are made with a baking mix that gives them more of a muffin consistency. However, these are still light and not too dry. If you want to make them even more egg-like in consistency, try using more egg and less baking mix. This recipe is also wonderful for all different vegetable and meat variations. Since I didn't have bacon when I made these, I made them vegetarian, but they would have been even better with a little crispy bacon. The great thing about making them in mini-muffin pans is that they are great for tea parties or other occasions when you do not want to worry about utensils.

Makes approximately 24-36 depending on muffin size and number of add-ins
Ingredients: 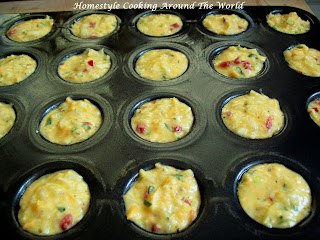 Posted by Sarah/Homestyle Cooking Around The World at Saturday, July 20, 2013 No comments: 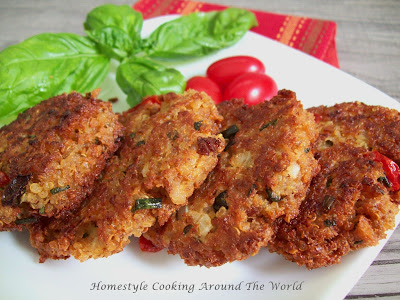 I have been falling in love with quinoa lately. It is such a power-house of nutrition and yet is so versatile. It also cooks quite fast. So when some friends and I were meeting at a beautiful historic home nearby for a garden party, I had planned to make arancini (rice balls), but I had not realized until it was too late that these are actually from leftover risotto. So from lack of pre-planning, I was forced to make some last minute changes and found these quinoa patties from wholeliving.com. I decided to go with an Italian theme and play off the parmesan cheese. All in all, I was really pleased how well they turned out. It took a little practice to find the right consistency but don't worry too much about it since the parmesan actually helps makes a nice crust as it cooks. I almost thought the patties were a little easier to cook when they were a little more moist. As always, feel free to leave out any seasonings or ingredients and add in some you really like, instead. I really loved the way the patties took on a roasted tomato and basil flavor and the parmesan added a nice subtle flavor. 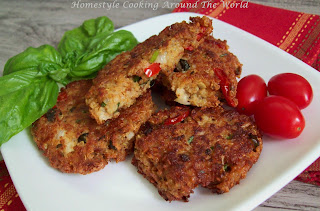 Posted by Sarah/Homestyle Cooking Around The World at Thursday, July 18, 2013 1 comment: 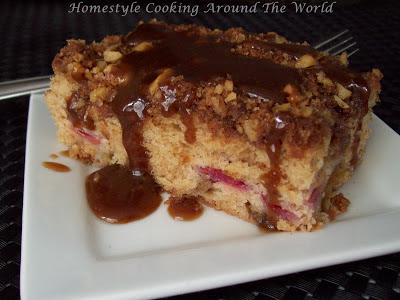 This is another great rhubarb recipe that I adapted from a Taste of Home magazine. Since I had some tart cherries that were not really enough to make something by themselves, I decided to add them into the cake with the rhubarb. In addition, I opted to use some cinnamon and vanilla in the cake, as well as some chopped nuts in the topping. Feel free to leave the cinnamon out and just add vanilla. The original sauce recipe also calls for double the amount of ingredients, but I felt that even using only 1/2 the original amounts made more than enough caramel sauce. Feel free to substitute any other fruits such as apples/cranberries, mixed berries, pears. Enjoy this very moist coffee cake anytime of the year by using seasonal fruits or even frozen fruits!

Ingredients:
Cake-
Topping-
Sauce-
Directions:
Topping:
Bake at 350 degrees for 35-40 minutes or until the toothpick inserted near the center comes out clean. Cool for 10 minutes before serving.

For Sauce, in a small saucepan, melt the butter. Stir in brown sugar and cream; bring to a boil. Reduce heat; simmer for 3-4 minutes or until slightly thickened. Serve with warm coffee cake. 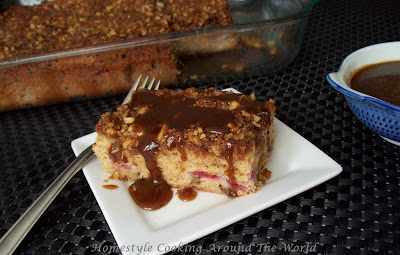 Posted by Sarah/Homestyle Cooking Around The World at Sunday, July 07, 2013 No comments: